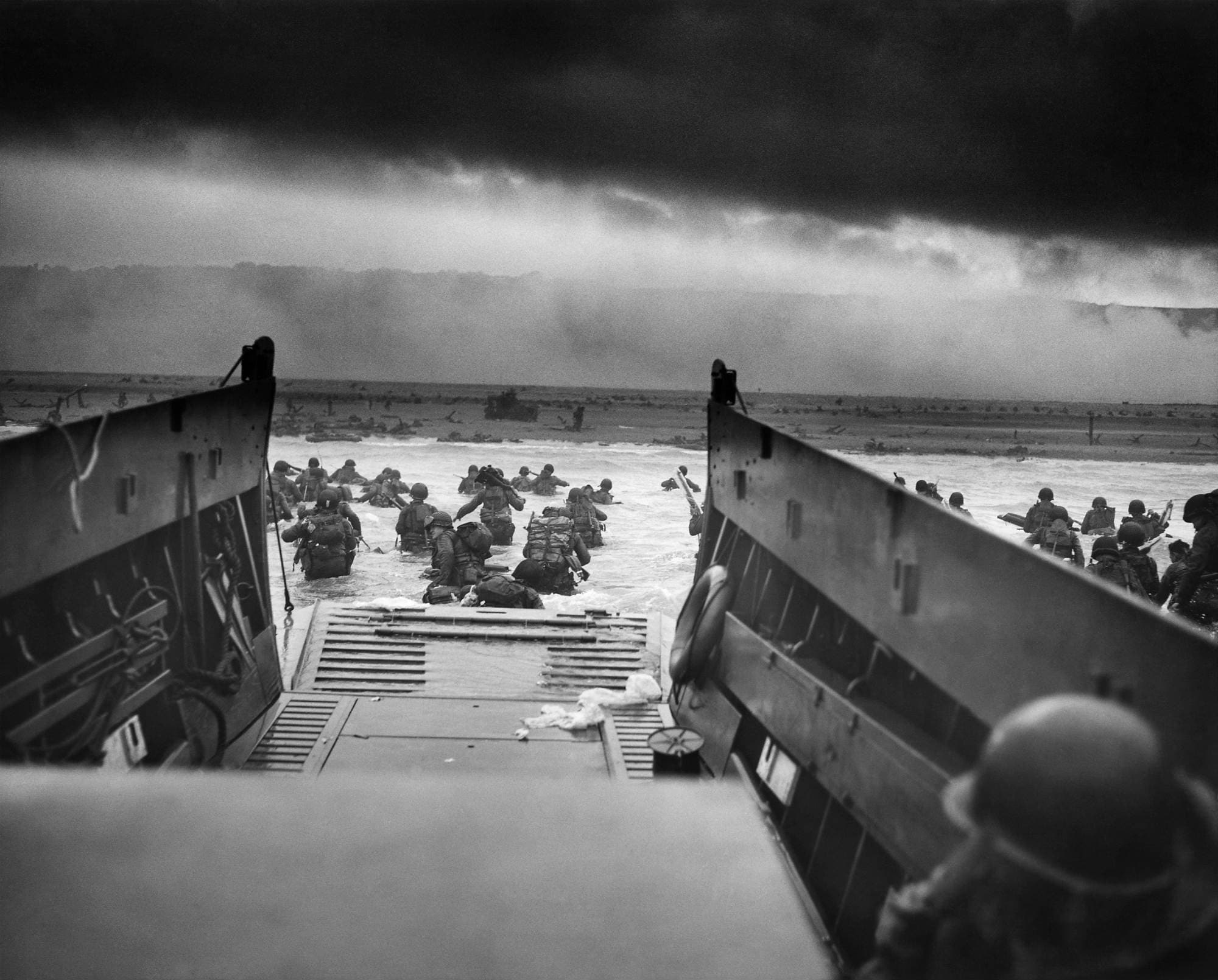 There are many great things about photography, if you ask me.

But among its best qualities is the ability to transport us to a moment in time.

That is, a photograph is sometimes the most powerful reminder of events of the past, something that can often trigger a feeling or an emotion on a much greater level than other means of documenting the world’s events.

This collection of photos certainly fits into that thinking.

This isn’t a complete list of the world’s most iconic photos, just a sampling of what people have been able to do with a camera when the moment counted. 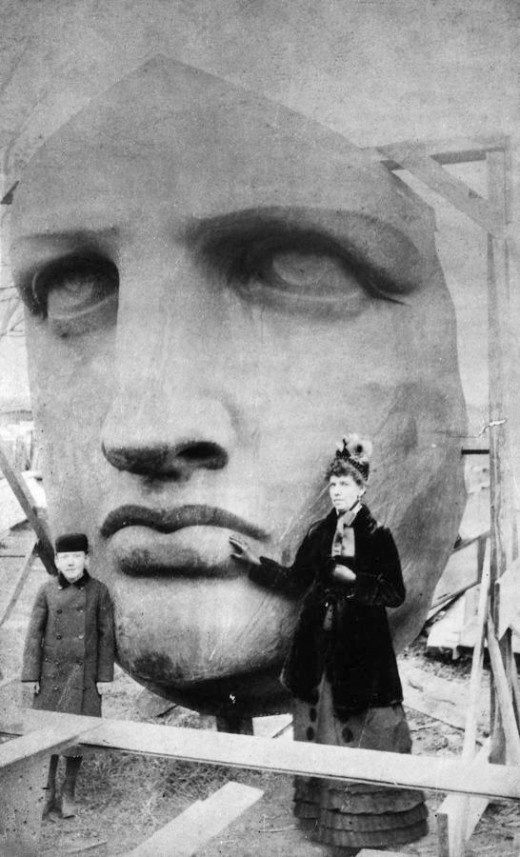 A gift from France, the Statue of Liberty was designed by Frederic Auguste Bartholdi and built by Gustave Eiffel (of Eiffel Tower fame). The statue was dedicated on October 28, 1886, but her head was delivered and unpacked on June 17, 1885. Read more about the Statue of Liberty. 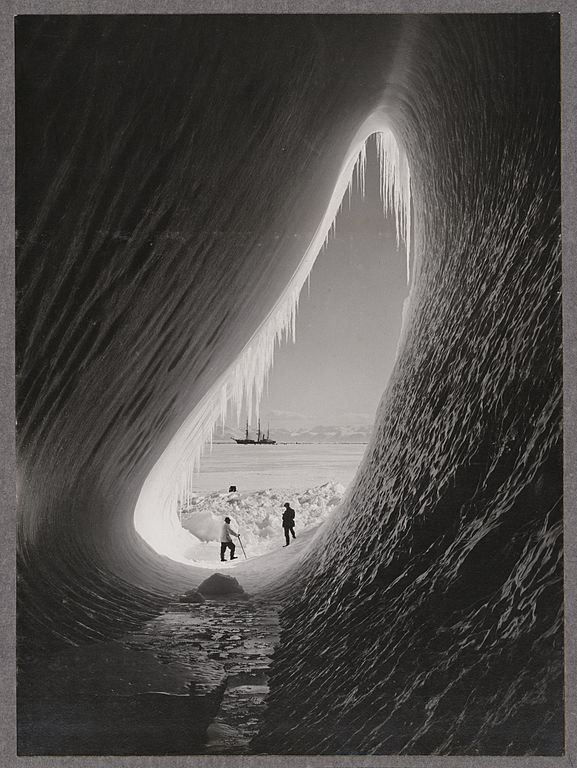 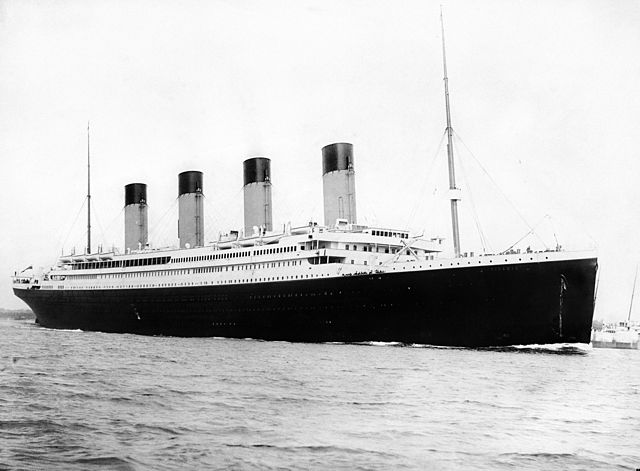 This photo was taken as the Titanic set sail from Southampton, United Kingdom on April 10, 1912. The ship would sink just five days later. Read more about the Titanic. 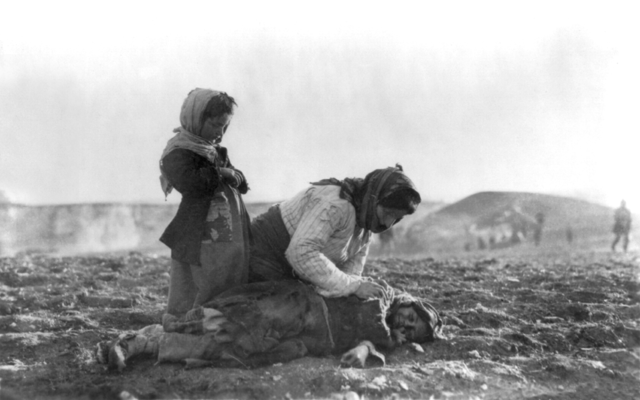 By: American Committee for Relief in the Near East [Public domain], via Wikimedia Commons

This image, captured during the Armenian Genocide, shows the incredible human toll of the efforts of the Ottoman Empire (and, later, Turkey) to exterminate the Armenian population during and after World War I. Read more about the genocide. 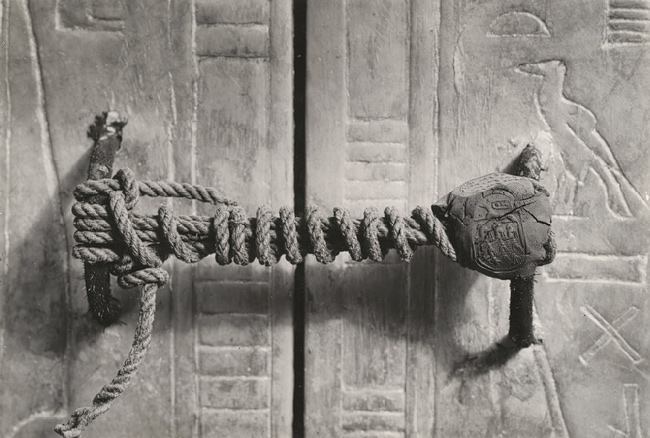 When this photograph was taken by Harry Burton in 1922, this seal on King Tut’s tomb had been untouched for 3,245 years. Read more about the discovery of the tomb. 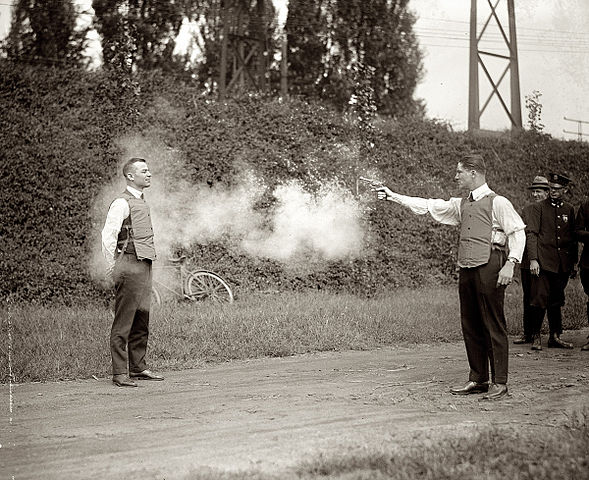 Though variations of bulletproof vests existed for quite some time before this image was taken in 1923, law enforcement agencies in the United States found themselves needing improved protection from the many criminal gangs that were popping up – and armed to the teeth. Read more.

August Landmesser Refuses to Give the Nazi Salute (1936) 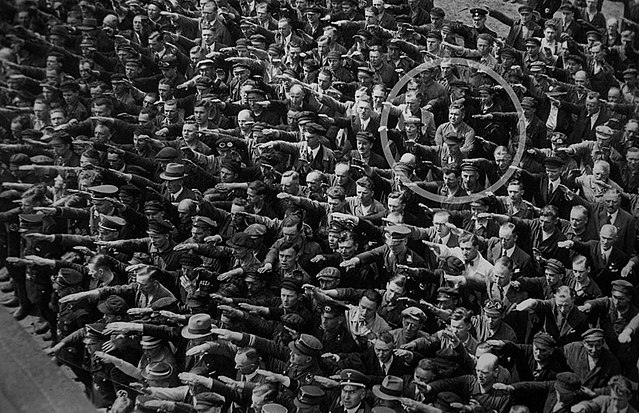 There is some debate about whether or not the man seen in the photo refusing to do the Nazi salute is August Landmesser or not. If it is, it would make sense, as he had numerous run-ins with the Nazis for “dishonoring the race.” Read more about Landmesser. 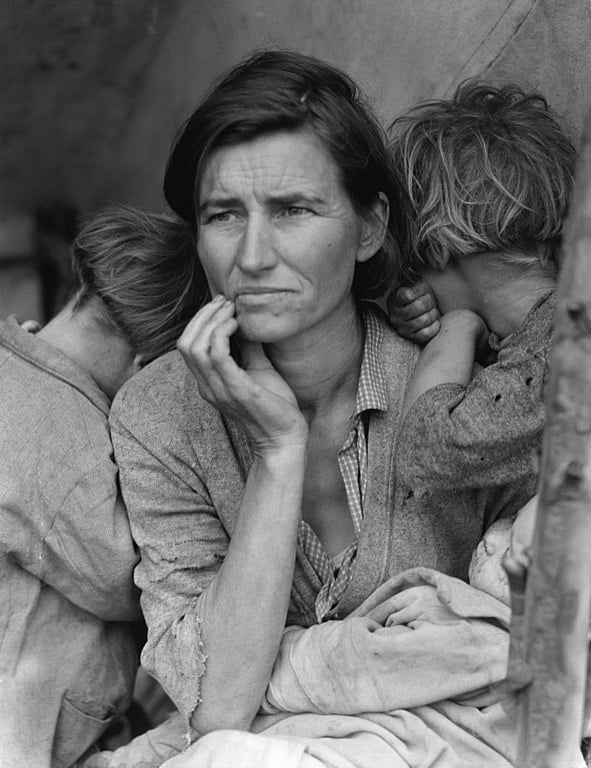 One of the most iconic images of the Great Depression Era, Migrant Mother, by Dorothea Lange, came to epitomize the struggles that migrant workers and the working poor faced at that time. Read more about Lange’s work. 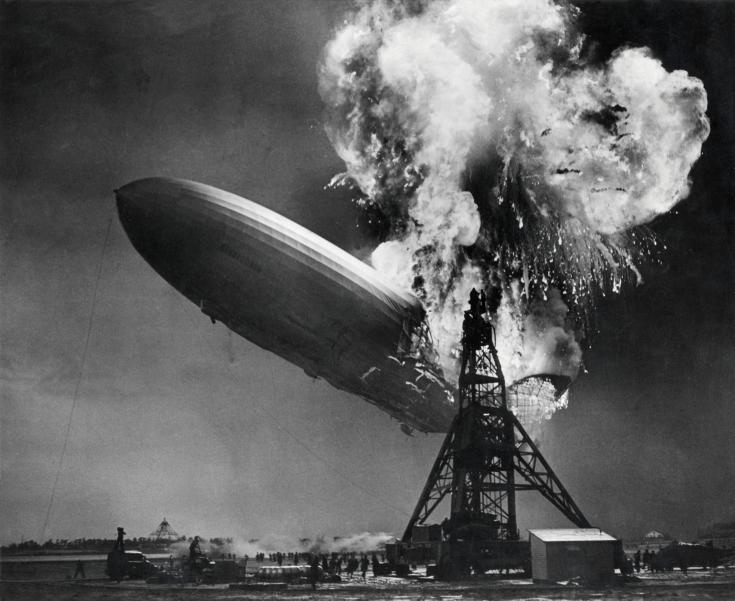 By Sam Shere [No restrictions], via Wikimedia Commons

Airships were supposed to be the wave of the future, but when the Hindenburg caught fire as it attempted to dock in Manchester Township, New Jersey, it marked the end of airship travel as a legitimate form of mass transit. Thirty-six people died in the disaster. Read more about the Hindenburg. 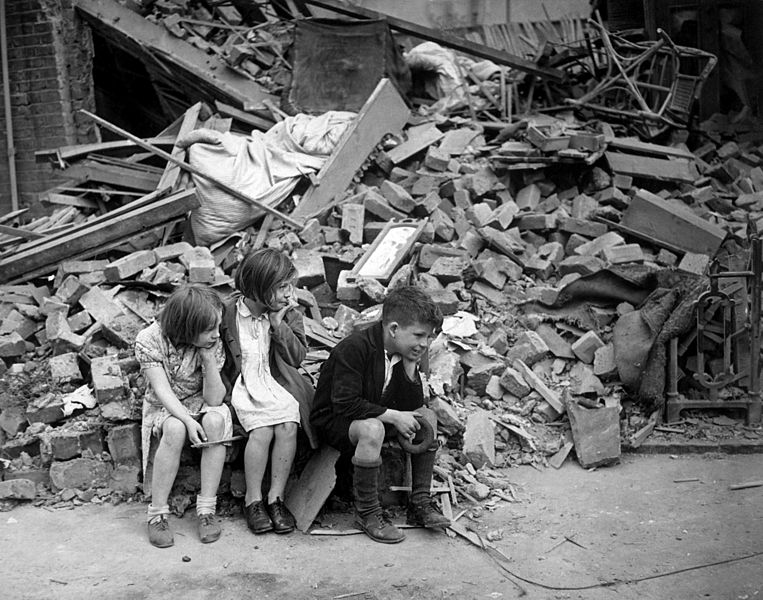 By The original uploader was Sue Wallace at English Wikipedia (Transferred from en.wikipedia to Commons.) [CC BY-SA 2.0 (https://creativecommons.org/licenses/by-sa/2.0)], via Wikimedia Commons

Throughout 1940 and 1941, Hitler’s German forces attempted to drive the United Kingdom out of the war with merciless bombings of major cities, including London. This image, captured in September 1940, shows children in London’s East End that have lost everything to an air raid attack by the Germans. Learn more. 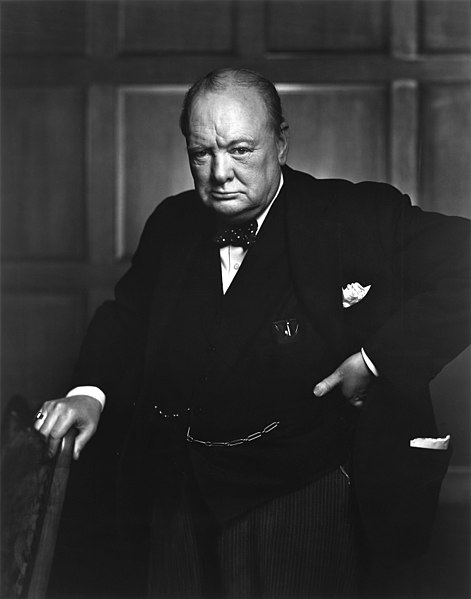 By BiblioArchives / LibraryArchives [CC BY 2.0 (http://creativecommons.org/licenses/by/2.0)], via Wikimedia Commons

Yousuf Karsh took this iconic portrait of Winston Churchill in the Canadian Parliament in December 1941. The scowl on Churchill’s face is reportedly due to the fact that Karsh had just taken away his cigar. Learn more about Churchill. 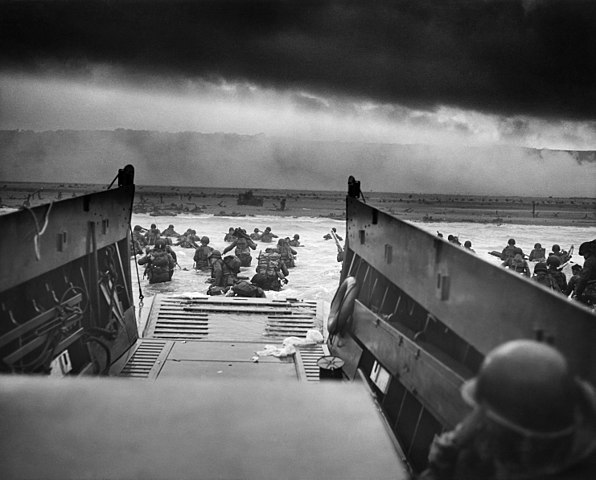 When Allied forces stormed Normandy on D-Day, June 6, 1944, this was the view that troops had as they disembarked from the landing vehicles to make their way to the beach. More than 425,000 Allied and German troops were either killed in action, went missing, or were injured during the battle. Learn more. 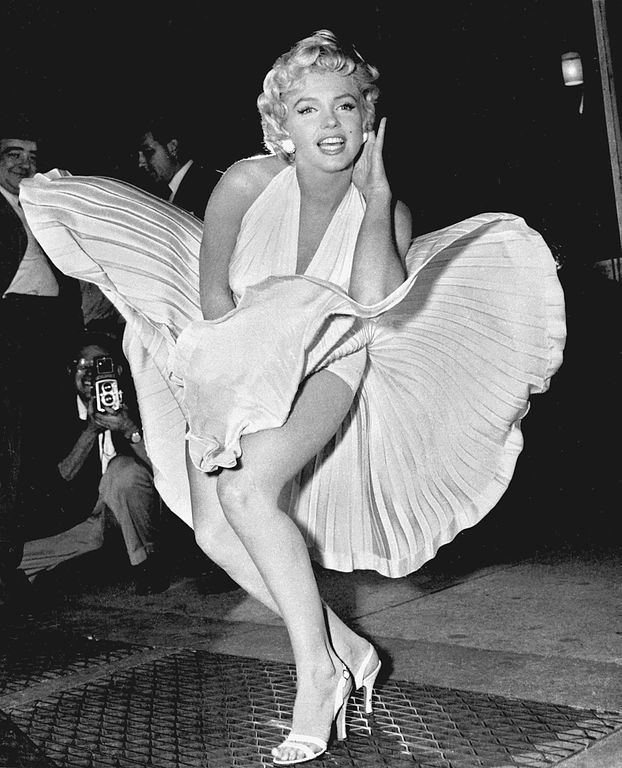 In what is perhaps one of the most famous photos of a celebrity ever taken, this shot immortalized Marilyn Monroe as one of the great icons of Hollywood. It was taken in 1954 as Monroe filmed the subway grate scene in her movie The Seven Year Itch. Read more about Monroe’s life and work. 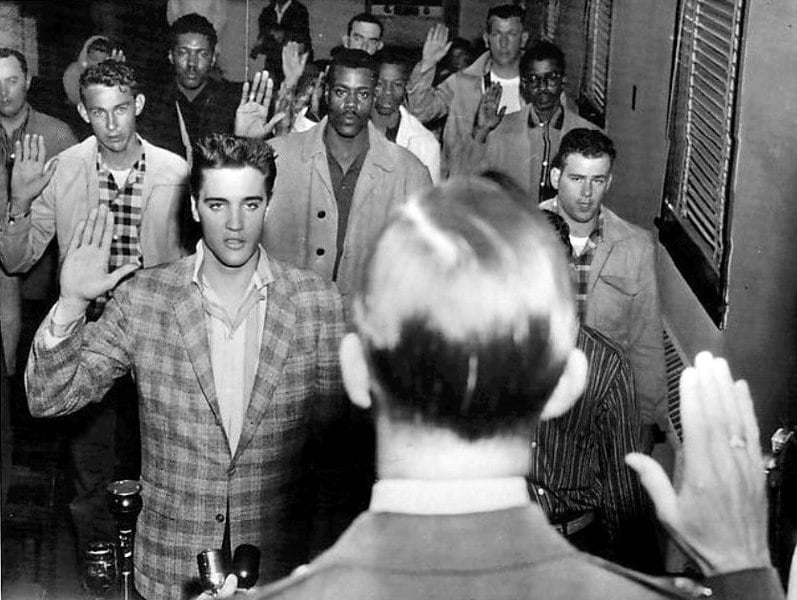 Elvis served in the army from 1958-1960 as a regular soldier, even though he was offered the opportunity to work in the Special Services and entertain troops around the world. The image above is of the swearing-in ceremony when he joined. Learn more about Elvis’ service here. 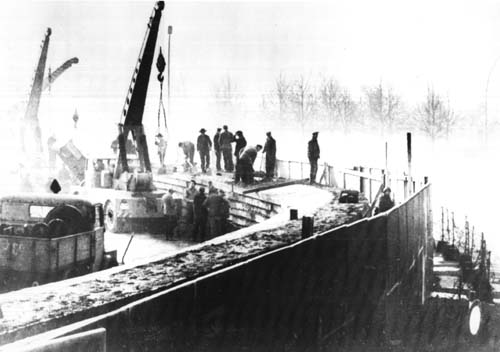 From 1961 to 1989, the Berlin Wall was a symbol of the Iron Curtain dividing the U.S.-friendly West with the U.S.S.R.-friendly East portions of the city. This image shows the construction of the wall by East German workers in 1961. Read more about the Berlin Wall. 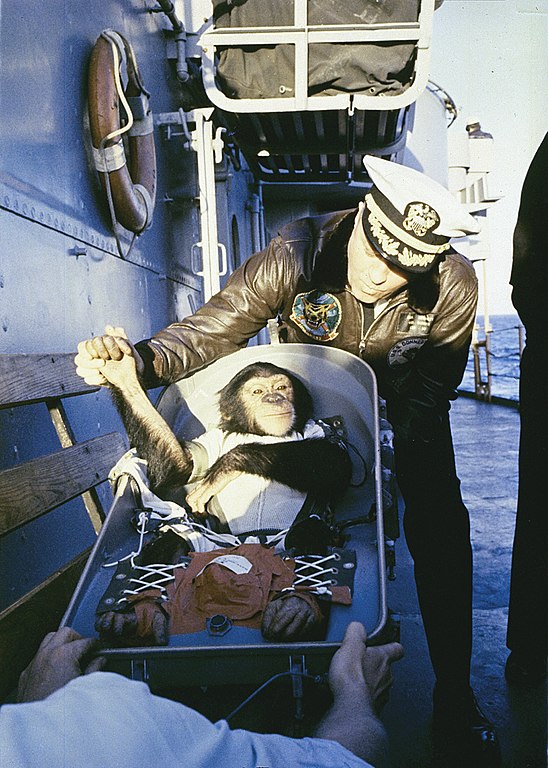 By NASA on The Commons (Great Images in NASA Description) [Public domain], via Wikimedia Commons

Before sending men into space, NASA enlisted the help of Ham, a chimpanzee, to determine what effects a human might encounter from space flight. The image above was taken after Ham’s 16-minute, 39-second sub-orbital space flight. Learn more about Ham.

Martin Luther King Delivers His “I Have a Dream” Speech (1963) 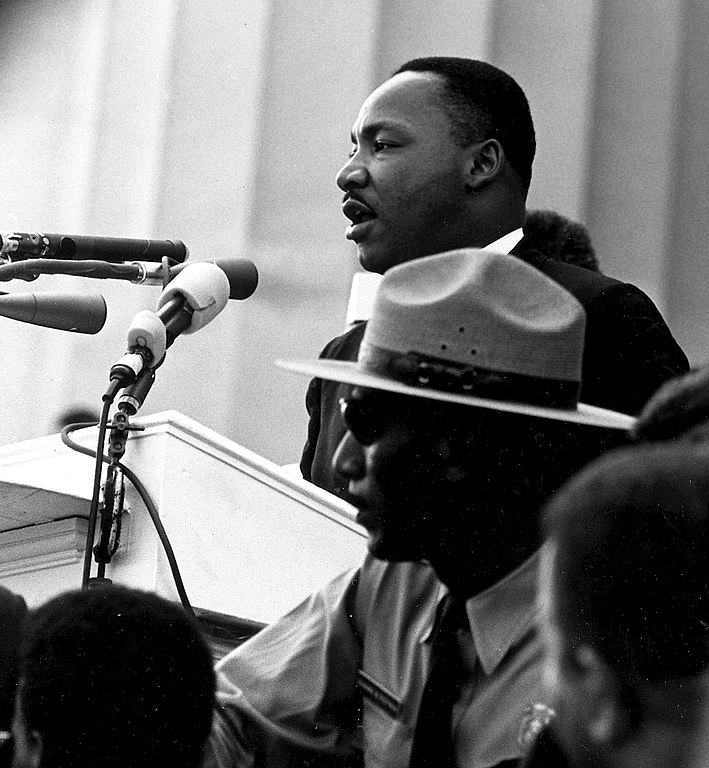 On August 28, 1963, Martin Luther King delivered one of the most famous speeches in history, “I Have a Dream,” at the March on Washington for Jobs and Freedom on the steps of the Lincoln Memorial. Read more about King’s life and work. 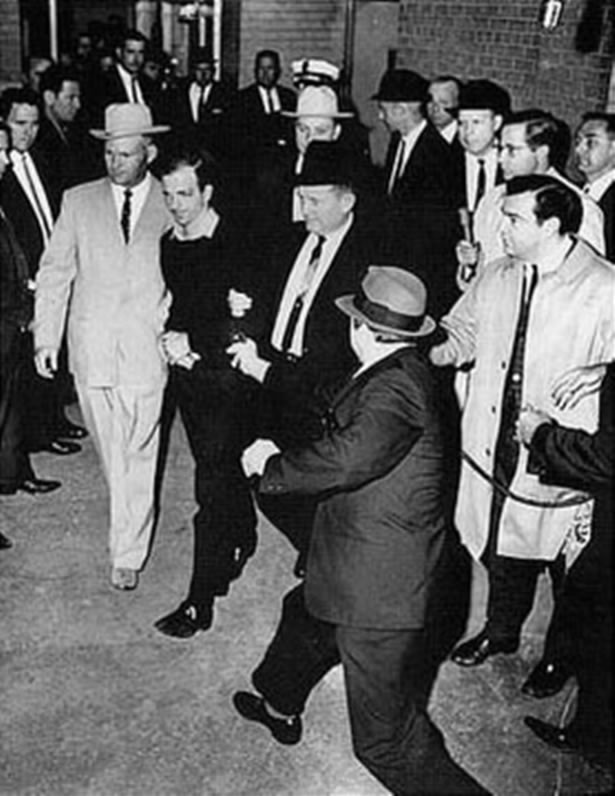 Just two days after allegedly assassinating President Kennedy, Lee Harvey Oswald was himself killed. Jack Ruby, shown lunging toward Oswald in the image above, was responsible for Oswald’s murder, which took place in the basement of the Dallas Police Headquarters. Learn more about Oswald.

Aftermath of the Oklahoma City Bombing (1995) 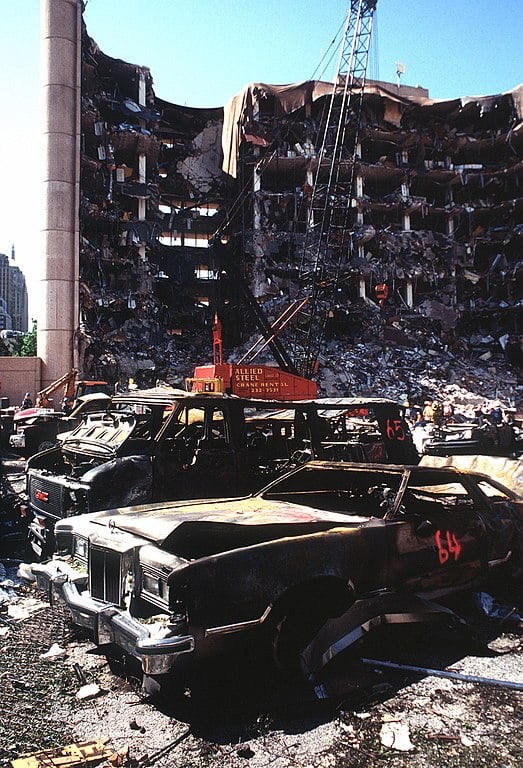 On April 19, 1995, a massive truck bomb exploded outside the Alfred P. Murrah Federal Building in Downtown Oklahoma City, killing 168 people, injuring nearly 700 others, and destroyed or damaged over 300 buildings. Until September 11, 2001, it was the worst terrorist attack on U.S. soil. Learn more about the bombing. 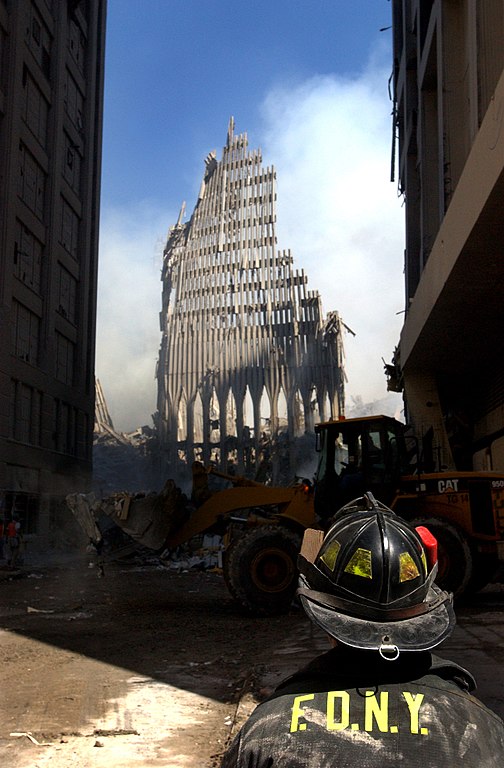 This image, taken on September 13, 2001, shows a New York City firefighter looking at what’s left standing of the South Tower of the World Trade Center. Nearly 3,000 people were killed, over 6,000 people were injured, and more than $10 billion in damage was done that day. Read More about the 9/11 attacks. 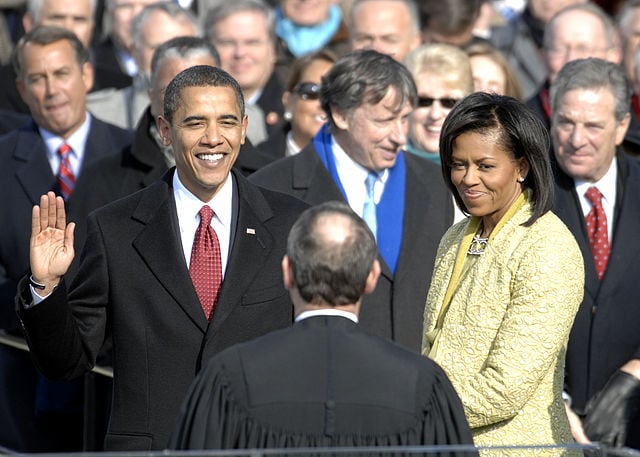 On January 20, 2009, Barack Obama was sworn in as the 44th President of the United States, and the first African-American to hold that title. Learn more about the Obama presidency.

Aftermath of the Boston Marathon Bombing (2013) 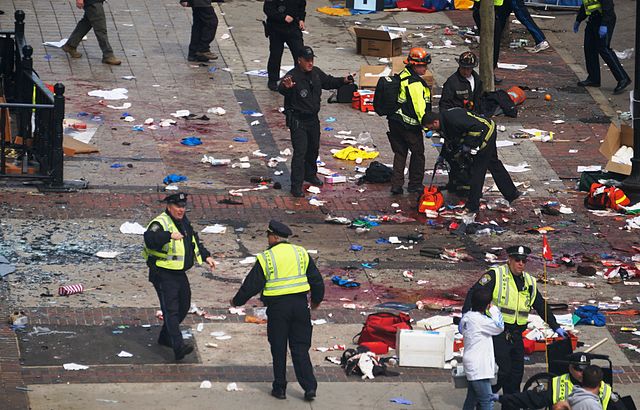